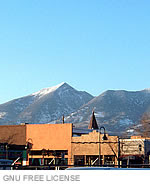 Unlike the trains that regularly come through town, singing out reminders of Flagstaff’s heritage, this city is far from predictable. You can feel its Old West charm through and through, but Flagstaff is infused with new energy — both from its residents and college students at Northern Arizona University. The university adds jobs to the city’s economy, plus arts and entertainment to its cultural scene.

The government is big business in Flagstaff, which is the Coconino County seat. The second-biggest industry is tourism, a result of the city’s proximity to the Grand Canyon and Indian ruins at Wupatki and Walnut Canyon.

Because the city is nestled at the base of the San Francisco Peaks, the last thing you’d expect to find is a manufacturing sector. But Nestlé Purina and SCA Tissue have facilities here, and Southwest Windpower calls Flagstaff home.